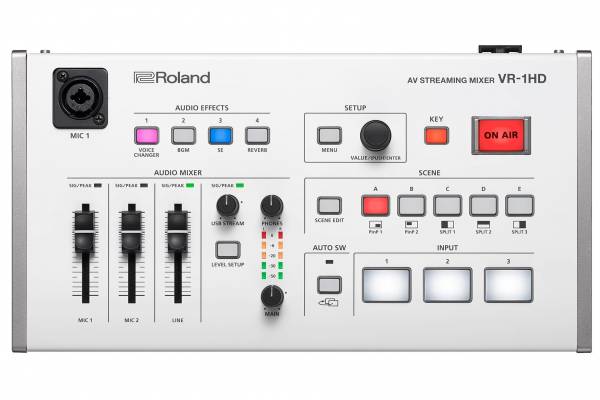 With the Roland VR-1HD, you can produce dynamic live streams from multiple cameras with image and audio quality that far surpasses traditional streams from a smartphone or webcam. Whether you're a producer, gamer, commentator or presenter, creating professional live streams has never been easier. This way, the VR-1HD ensures that the increasing number of comments among your posts has nothing to do with the quality of your streams.

The VR-1HD has three HDMI inputs. Each input can handle a comforting variety of HD and computer video resolutions. This makes it easy to connect, switch and stream different sources, including cameras, presentations, gameplays and even smartphones or tablets. The audio from each source can be mixed with the signals from the two studio-quality XLR microphone inputs and the dedicated line input. The VR-1HD was developed for live broadcasts and with its controls and microphone input (incl. gooseneck microphone) on the top of the housing, it allows hands-free and headset-free operation.

Livestreams that stand out from the crowd

The editing software offers impressive layering options for uploaded videos, including professional transitions that make live video look rather old-fashioned by comparison. In addition, the VR-1HD has built-in scene switching to instantly switch between preset arrangements of layered sources in customizable inset windows.
You can pre-set scenes and recall them via five preset buttons to make your live streams even more interesting.

Rage out of the crowd

Chroma keying and greenscreens place an object in front of an unreal background - a high-quality visual effect often used in movies and weather reports. Rage out of the crowd of live streamers and broadcast "live" from a beach or other planet. Or use Chroma Key technology and promote your products directly from home.

Connect to your computer and your audience

The VR-1HD uses the same connection technology as a webcam. All you need to do is connect to your computer via USB 3.0 and access the livecast or recording software. You'll find yourself in the middle of a professionally produced Full HD broadcast on your favourite platform - from Twitch to YouTube to Facebook Live.

Related links to "Roland VR-1HD"
Similar products Customers also bought Customers also viewed
Similar products
Blackmagic ATEM 2 M/E Broadcast Panel
€13,225.23 * €13,921.29 *
Blackmagic ATEM 2 M/E Production Studio 4K
€3,489.00 *
Blackmagic ATEM 1 M/E Production Studio 4K
€2,195.00 *
Panasonic AV-HS60C4E
€20,000.00 *
Customers also bought
Customers also viewed
Cookie preferences
This website uses cookies, which are necessary for the technical operation of the website and are always set. Other cookies, which increase the comfort when using this website, are used for direct advertising or to facilitate interaction with other websites and social networks, are only set with your consent.
Trusted Shops Reviews Toolkit: 1.1.2
This website uses cookies to ensure you get the best experience on our website.
Accept